Mentoring the Path from Classroom to Workplace

One way Nani Detti (MALD 23) measures the enthusiasm level among young Ethiopians looking for work is simply by the number of applications she reviews. The 25-year-old Fletcher student and founder of the Misale Initiative, a non-profit launched in 2019 to match Ethiopian university students with career mentors, recently announced the availability of a few unpaid internships. A week later, she had received 200 inquiries from Ethiopians, all around her same age.

Detti, who hails from the country's capital of Addis Ababa, sees unemployment among Ethiopian graduates as a big problem urgently in need of viable solutions. She spent this past summer meeting with various stakeholders to try and understand the impact unemployment is having on young people in Ethiopia -- one being brain drain. 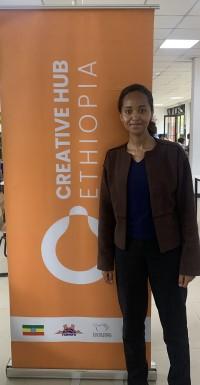 During this time, she met with previous Misale mentees, spent time with representatives at Addis Ababa University’s career center, visited the human resources department at Heineken (a major Addis Ababa employer), and met with government officials. These were all part of a deep exploration into the challenges of gainful employment among young Ethiopians.

Detti discovered that some students seek basic guidance in writing resumes and cover letters and optimizing their LinkedIn profiles. Others struggle with prospective career shifts from engineering and medicine, two of Ethiopia's most popular fields of study, to other areas. Not all universities, meanwhile, offer robust career centers or knowledgeable counselors.

What she saw was a cluster of candidates getting stuck in a narrow employment funnel, with some even leaving the country for work. That's where Misale can help, by easing graduates' transition from classroom to workplace and keeping them in their home country.

She intends to apply the information she gathered this summer to advance Misale's mission beyond its core mentorship program. Recently she signed a memorandum of understanding with the Aspire Leaders Program, which was founded at Harvard and targets low-income, first-generation university students aged 18-26. Misale will partner with Ethiopian universities to encourage students to apply to the program, where they would be eligible to take HarvardX courses and interact with faculty at Harvard and other universities.

From her aforementioned internship applications, Detti plans to bring on content creators, expand Misale's website and launch a YouTube channel to highlight career development strategies, such as cover letter writing.

However, the mentor-mentee relationship will remain a core offering and as such, Misale will recruit and train mentors both within and outside of Ethiopia to assist students with career development. Detti's goal is to pair approximately 25 Ethiopian university students and graduates with educators and/or professionals.

Last spring, fellow Fletcher students in her Managing NGOs and Social Enterprises class helped conduct a thorough analysis on Misale Initiative, from target participants to impact measurement metrics. The process gave Detti a better understanding of how to optimize the Misale experience for participants because, she says, "We're losing a lot of young people in a country that really needs them, but there really isn't an infrastructure for them to grow and explore different things," she said.

She contrasts her own privilege of studying abroad -- in Canada at Bishop Strachan School in Toronto, and in the US at St. John's College in Santa Fe and Fletcher in Medford – with the freedom to explore that is not available to many young people in Ethiopia.

"At Fletcher, I'm not boxed in, and no one is saying, 'Your focus is conflict resolution and negotiation, so why are you studying business?'"

Detti would like to pursue an MBA and plans to return to Ethiopia after graduation, perhaps to work in development consulting. Regardless of her destination, she sees Misale continuing.

"Even if I'm not leading the organization directly in a few years," Detti said, "I want it to be in a place where it's established and up-and-running."