The Art and Practice of Science Diplomacy

When it comes to climate, science must be central to every conversation.

With the 2022 United Nations Climate Change Conference of the Parties (COP) taking place in November in Egypt, and the rescheduled COP 15 set to happen one month later in Canada, Dr. Alicia Pérez-Porro (GMAP 21) says the immediacy of the back-to-back conferences underscores how much work there is to do.

"In terms of climate change and biodiversity loss and in terms of environmental challenges, I really believe we don't have time to waste. There's no time," says Pérez-Porro. "I think it is key to have science from the very beginning at those tables. Science is there informing from minute zero. That is what's going to make better and more effective solutions and policies." 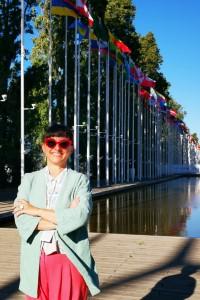 Pérez-Porro is the scientific coordinator for the Center for Forest Ecology Research and Applications (CREAF), a Barcelona-based research center specializing in the study of ecology. She describes herself as a creator of bubbles, facilitating the flow of knowledge, inquisition, and relationships between scientists, decisionmakers, and policymakers. Gender equality is one of her philosophical pillars.

She has a network of global connections, from governments to research centers to NGOs. Pérez-Porro knows she will do her best work if she is at the center of multiple conversations before and during both COP meetings.

"We have a better scientific understanding of the implications," says Pérez-Porro. "If there's more CO2 emission in the atmosphere, that will negatively affect the oceans. Because of more acidification of the oceans, that means we are losing biodiversity. If we lose biodiversity, our fisheries' stock decreases. Then it goes on to trade."

"The scientific knowledge is connecting all of these dots. We are unpacking all of this so it gets to the international level and is reflected in how decisions are made."

Pérez-Porro's field is marine biology - in particular, marine sponges - and she has a personal interest in incorporating greater marine interest at COP 27.

While dealing with the complexities of tying together divergent cultures, political systems, and leadership perspectives to address the climate crisis, she has identified a clear commonality: science. In that way, the science diplomacy Pérez-Porro practices can have a deeper international impact than policy alone.

"Not a lot of people want to sit at a table with this country or that country to talk about immigration or talk about nuclear power," says Pérez-Porro. "But if you talk to them from the perspective of science, sometimes they accept a seat at the table. Because at the end of the day, we are talking about climate change and biodiversity."

"When you're also sitting at a table with countries that don't usually sit with each other, you make these connections in a very incidental way."

At CREAF, Pérez-Porro is also responsible for leading what she terms the Mediterranean strategy, which is the region's approach to tackling climate change and concurrent issues such as food insecurity and water access. It is a complex issue because so many different countries and governments -- from northern Africa to the Middle East to southern Europe -- are represented.

The tools to tackle these problems from multiple angles came from her time at Fletcher, where she learned about interconnectedness, for example, of trade with environment.

"GMAP made my world way bigger," says Pérez-Porro. "I am really good at connecting the dots. I started GMAP with 10 dots, and I ended GMAP with a million dots."