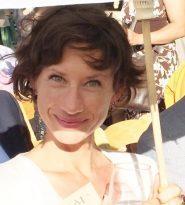 Kimberly Howe leads and contributes to a range of research projects at Feinstein. The majority of her work is focused on the Syria crisis, and the effects of humanitarian and political interventions on civilians, armed groups, and political structures. Kimberly has designed and conducted mixed methods research projects in several war-affected countries around the world including Burundi, the Democratic Republic of the Congo, Colombia, Uganda, Northern Iraq, Syria, Turkey, Lebanon, and Jordan.

Since the late 1990s, Kimberly has been working in a variety of ways to improve the lives of people affected by conflict and war. Kimberly regularly conducts research for the U.S. government on their programs targeting refugees, internally displaced persons, and war-affected populations. Prior to joining the center, she was a Randolph Jennings Peace Scholar at the US Institute of Peace, an Adjunct Associate Research Scholar at SIPA Columbia University, and a Fellow at Harvard University Medical School. From 1999 to 2007, she practiced as a psychotherapist treating survivors of torture and interpersonal violence.

Kimberly holds a B.A. in psychology and an M.S.W. from Simmons College, Boston. She has an M.A.L.D. and Ph.D. in international relations from the Fletcher School of Law and Diplomacy at Tufts University.

When she is not in the field, she is based in southern France, where the weather is always nice.
(read more)
Career Highlights / Publications Research Professional Activities Courses / Teaching Activities