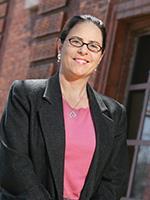 Katrina Burgess is Associate Professor of Political Economy and Director of the Henry J. Leir Institute of Migration and Human Security at the Fletcher School. She is the author of two award-winning books: Courting Migrants: How States Make Diasporas and Diasporas Make States (Oxford, 2020) and Parties and Unions in the New Global Economy (Pittsburgh, 2004). She has published numerous articles and book chapters on labor politics, remittances, migration, and diasporas, including a recent article in Electoral Studies with Michael Tyburski on political party outreach to voters abroad. In 2019, she wrote and produced Waylaid in Tijuana, a documentary about Haitian and Central American migrants whose journeys to the United States are disrupted by shifts in U.S. policy. Her current research addresses (1) how migrants traveling north through Mexico assess risk and process information regarding their prospects for entering the United States; and (2) the impact of restrictionist immigration policies on U.S.-Mexico border communities. Before coming to Fletcher, she taught at Brown University, Syracuse University, UCLA, and the Autonomous Technological Institute of Mexico (ITAM). Burgess received a B.A. in political science from Swarthmore College, an M.A. in international relations from the University of Southern California, and a PhD in politics from Princeton University. She has also served as Assistant Director of the U.S.-Mexico Project at the Overseas Development Council in Washington, D.C. and Associate Director of the California-Mexico Project at USC in Los Angeles.
(read more)