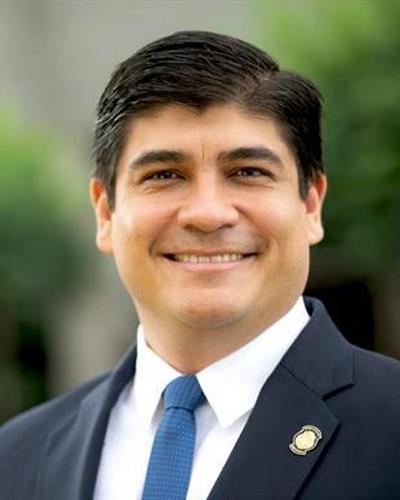 Carlos Alvarado Quesada served as the 48th President of the Republic of Costa Rica from May 2018 to May 2022, when his constitutionally limited term ended. Under President Alvarado's leadership, Costa Rica contributed to global efforts to combat climate change and defended human rights, democracy, and multilateralism.

President Alvarado is a recipient of the 2022 Planetary Leadership Award by the National Geographic Society for his outstanding commitment and action toward protecting the ocean and in September 2019 he received on behalf of his country the Champion on the Earth Award for policy leadership, presented by the United Nations Environment Program. In November 2019, he was named one of TIME's 100 Next emerging leaders around the world who are shaping the future and defining the next generation of leadership.

President Alvarado's prior government leadership service includes a tenure as Minister of Labor and Social Security (2016-2018) and as Minister of Human Development and Social Inclusion (2014 – 2016) and Executive President of the Joint Social Welfare Institute, responsible for implementing social protection and promoting poverty alleviation programs. Before entering politics, he worked for Procter and Gamble, Latin America.
(read more)
Courses / Teaching Activities