I Don't Have All the Answers... But I Think You Do 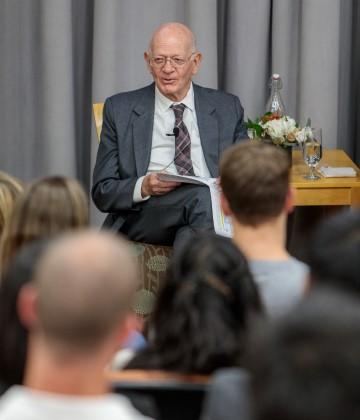 "We are now increasingly in what looks again like great power competition... but the world in which it occurs is no longer the bipolar or tripolar world of the Cold War."

With this recognition of shifting global currents, Ambassador Ronald Neumann introduced the Sisco Memorial Forum to its audience at The Fletcher School. The former United States Ambassador to Afghanistan, Algeria, and Bahrain, Neumann serves as President of the American Academy of Diplomacy, the organization behind the annual forum. The forum, which seeks to address major challenges in U.S. foreign policy, came to The Fletcher School for its 2022 program on great power competition.

Neumann's characterization of the contemporary power landscape draws distinction from both the bifurcated world of the mid-20th Century and the unipolar moment that followed it. Today, great powers compete in a "polycentric" planet, one in which middle powers assert their own priorities regionally and avoid zero-sum international alignment. The rising superpower rivalry between the United States and China occurs against this backdrop, a world of overlapping relationships and uncertain focus points. 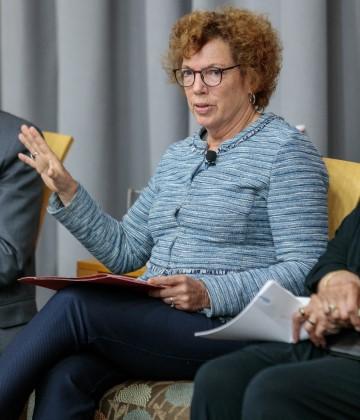 Ambassador Kathleen Doherty opened the panel discussion by assessing the balance of power in the global economy. The former U.S. Ambassador to Cyprus and Deputy Assistant Secretary of State for Europe, Doherty emphasized the importance of U.S. dollar primacy. As "king of currencies," the dollar accounts for sixty percent of global reserves. This includes $300b of Russian holdings frozen by western sanctions in response to Russia's invasion of Ukraine.

With western sanctions demonstrating the dollar's bite, U.S. competitors are beginning to explore "alternative payment systems," Doherty said. Still, would-be replacements such as the Chinese renminbi cannot challenge the dollar in the medium term. China's interest in maintaining access to the international financial system has also limited its willingness to provide concrete support for Russia during the Ukraine War, which would expose Chinese entities to secondary sanctions.

Instead, U.S-Chinese economic competition has found its "new battlefield" in the escalating tensions over sensitive technology. President Joe Biden's administration recently signaled a closer examination of Chinese investment in quantum computing, artificial intelligence, and smart batteries. This move, among other recent trends, could dramatically reshape the commercial relationship between the two largest global economies. 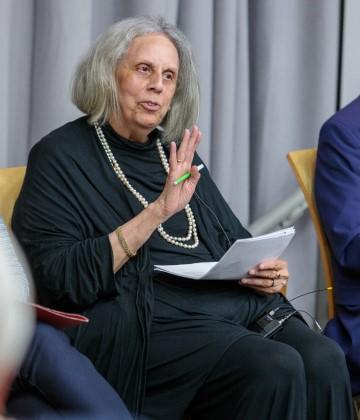 Ambassador Aurelia Brazeal spoke next about the position of the Global South in a time of great power rivalry. The first African-American woman from the career foreign service to be named ambassador, Brazeal served U.S. ambassadorships to Ethiopia, Kenya, and Micronesia.

In her remarks, Brazeal acknowledged the public scrutiny of alleged Chinese "debt traps" in the developing world, describing the prejudice many citizens of those countries perceive in the Chinese approach. Chinese investment vehicles such as the Belt and Road Initiative have also drawn criticism for their links to public corruption.

However, developing countries also notice a lack of interest from Washington, whose "lower profile" of activity has created an opening for Chinese engagement. Chinese trade and investment outpace American initiatives in much of Africa and Latin America, and Chinese contact with the Pacific island nations often precedes American diplomacy by decades.

Countries pursue exchanges with both great powers to diversify their strategic partnerships, a departure from the sharp divides of the Cold War era. Most of all, countries in the Global South hope to avoid becoming "caught" between the U.S. and China. Ambassador Brazeal demonstrated this concern by quoting an African proverb: "when elephants fight, it's the grass that suffers." 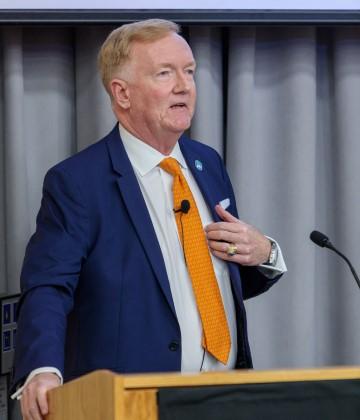 The final speaker, Admiral James Foggo, addressed the challenges facing the U.S. military in a complex threat landscape. Despite its stature, the U.S. lacks the capacity "to fight a campaign in two different fronts," forcing difficult choices in an era of concern for both Europe and the Pacific.

Admiral Foggo recounted his positive experiences negotiating with Chinese leaders at the Sunnylands Summit in 2013. But with China since pursuing an unprecedented build-up in armaments, Foggo described how his belief that the two world powers "had figured out a way to work together" was drawn into doubt.

Crucially, China exists outside of the arms control frameworks that limit U.S and Russian nuclear stockpiles. The Chinese arsenal of nuclear warheads may quadruple by 2030. In this climate, U.S. naval forces require significant investment to match the stated policy goal of bolstering Pacific presence. Admiral Foggo questioned whether this much-vaunted Pacific "pivot" can indeed occur, or if the United States will instead "pirouette" by maintaining focus on its established power base in Europe. 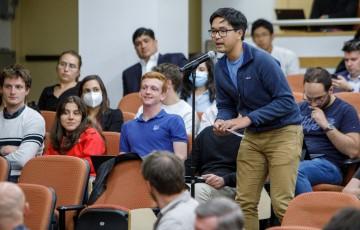 Panelists took many questions from the engaged Fletcher audience, addressing issues including the AUKUS submarine initiative, India's strategic autonomy, gridlock on the United Nations Security Council, and the paucity of U.S. ambassadorial nominations.

Several students raised matters in the educational sphere, mentioning the value of university exchanges and the negative impact of a strong dollar on international students. In response to a question from Chester Eng about African students abroad, Ambassador Brazeal referenced the legacy of the Kennedy Airlift and advocated for building a new American university in Africa.

Throughout the program, panelists emphasized the complexity of contemporary challenges and the opportunity for creative problem-solving. At the end of his remarks, Admiral Foggo included an appeal to the future U.S. diplomats in the audience.

"I don't have the answers," he said. "But I think you do, because you're the generation that's going to save our country."