The Art of Making Tough Choices

The former Costa Rican president, Carlos Alvarado Quesada, encourages students to find their path in life and be a positive influence in the world

Courage. Resiliency. Rigorous ingenuity. Those principles guided former Costa Rican president Carlos Alvarado Quesada during his time in office. They now form the pillars of his teaching philosophy as a Professor of Practice in Diplomacy and Senior Fellow in the Edward R. Murrow Center for a Digital World.

Hailed by Time Magazine in 2019 as one of the world's 100 emerging leaders, Alvarado successfully stared down simultaneous health, economic, and political crises during his tenure from 2018 to 2022. His nation’s second youngest president, he pushed through tough fiscal reforms to promote sustainable long-term growth, confronted labor unrest, and tackled Covid with effective policies.

In the Fletcher School's tradition of exposing students to world-class leaders, Alvarado reminds students they may need to make hard decisions for their nations. "I faced very complex situations and had to be resilient. As a politician, I sometimes had to choose between doing what was best or being loved. Our recovery measures were hard but were meant to protect people and save lives," he says.

A master of small-state diplomacy, Alvarado shares compelling success stories. Under his leadership, Costa Rica became the first Central American nation to join the Organization for Economic Cooperation and Development (OECD). His national decarbonization plan, the first since the Paris Agreement, will transform Costa Rica's economy by 2050. Along with the leaders of France and the United Kingdom, he created the High Ambition Coalition for Nature and People. It now has more than 100 member states dedicated to advancing the Paris accord. 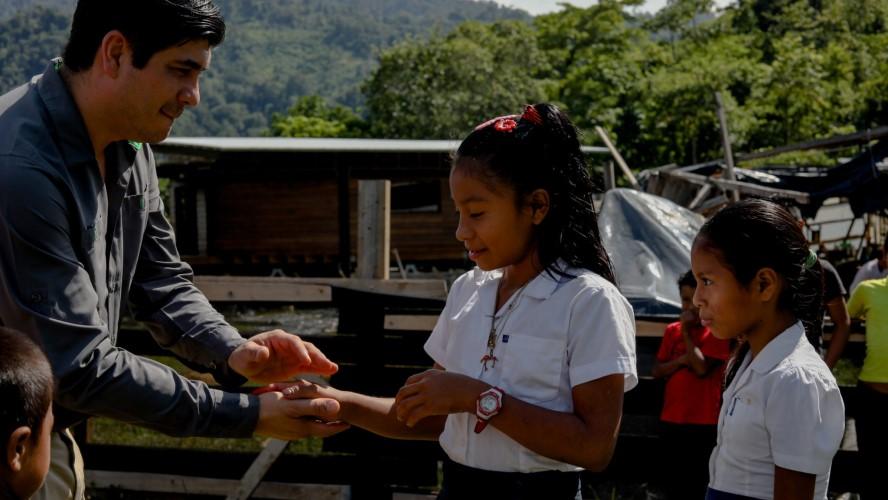 "Small states are not the countries that pollute the most, but they experience the consequences of the climate catastrophe," says Alvarado. "Nonetheless, small states have inherent power within their own narratives. My answer was to create a strong narrative based on strong ethical and environmental. To have an impact in the multilateral arena, I aim to led by example and created alliances with like-minded states and their leaders."

Alvarado urges students to enter the arena of political life. When he saw that no one in his party planned to run for president in 2018, he stepped up. " 'You have a responsibility,' " he told himself. " 'Either run or shut your mouth, because someone needs to act.' I decided then and there it was up to me to take a stand."

Rigorous ingenuity is a cornerstone of his policymaking. Strive to approach issues by being resourceful, he believes. To fight preconceptions, biases, or dogmas. At the same time, study and read in depth to constantly challenge existing beliefs.

This former novelist and journalist tells Fletcher's future executives they must go where their imaginations take them. "There is a link between great creativity and great change," he says. "Writing literature can be a great tool for positive change, and politics is also about being creative to create a better common good, either by implementing laws or executing programs."

Alvarado previously taught at Costa Rica University and Latin University of Costa Rica. For him. teaching is a two-way street, because knowledge is built jointly. "My objective is to connect with students—to inspire them to find their path in life and be a positive influence in the world. But inspiration goes in both directions. I enjoy being enlightened and energized by my students' enthusiasm."

Something surprising cements his policymaking instincts—his belief in the power of love. "Our humanity, our capacity to love, is what makes us exceptional. It needs to imprint whatever it is that we do," insists Alvarado who fought for same-sex marriage in Costa Rica.

"I want to translate that passion into the leadership lessons I share with students," he says. Even climate change, according to him, is "a struggle about love. It's about protecting children and future generations, because if we don't change the system there won't be any humanity in a few decades."