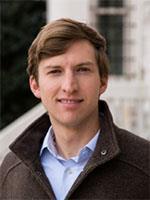 Chris Miller is Associate Professor of International History, where his research focuses on technology, geopolitics, economics, international affairs, and Russia.

He is author of Chip War: The Fight for the World's Most Critical Technology, a geopolitical history of the computer chip.

He is the author of three other books on Russia, including Putinomics: Power and Money in Resurgent Russia; We Shall Be Masters: Russia's Pivots to East Asia from Peter the Great to Putin; and The Struggle to Save the Soviet Economy: Mikhail Gorbachev and the Collapse of the USSR. He has previously served as the Associate Director of the Brady-Johnson Program in Grand Strategy at Yale, a lecturer at the New Economic School in Moscow, a visiting researcher at the Carnegie Moscow Center, a research associate at the Brookings Institution, and as a fellow at the German Marshall Fund's Transatlantic Academy. He received his PhD and MA from Yale University and his BA in history from Harvard University. For more information, see www.christophermiller.net.
(read more)
Career Highlights / Publications Research Professional Activities Courses / Teaching Activities